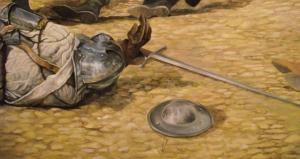 The county of Northants, perhaps more than any other, is intrinsically linked with the Wars of the Roses.  As well as a number of site such as Grafton Regis – where Elizabeth Woodville met Edward IV, Olney – where Edward surrendered to Warwick during the 1469 rebellions, it has not one but two pivotal battles of the War. These were Northampton in 1460, and Edgecote in 1469.

The Companye is very active in the preservation of these national heritage sites, and commemorate the fallen from both sides of the conflict on the anniversaries each year.

This page contains information on the 1460 Battle, and our heritage activities.

For a good article by the Companye on the myths and realities concerning the battle, have a read of this article.

As a special treat for the 2013 anniversary, we have details of the daily happenings in 1460 leading up to the battle. Note: this will be updated daily until the battle so be sure to check back!

The Events leading up the 1460 Battle

This years commemoration was over two days.  The first was a one day event for the Friends of Delapre Abbey.

The new painting by Matthew was truly spectacular, and Matthew has graciously given us permission to put a copy up here for you to see. It follows the Companye historian Mike Ingram’s theory of the battlefield layout and we thing Matthew has really done the theory justice.

Of course, it is no substitute for viewing the painting for real, and we encourage you to visit Delapre Abbey where is has been installed, and also take a tour of the battle site shown in the painting.

The 2013 event was a great success, and we were honoured to to be part of it.  You can read a full review of the event here.

The second part was an evening walk on the actual anniversary itself.  This was well attended by locals, representatives from the Council, and local historians. The anniversary walk greatly raised the profile of the battlefield, and we even made the BBC website.  You can read a review of the 2013 Anniversary Walk here.