Bevors & how not to wear them

Within the UK re-enactment and living history communities, we get a lot right. But we also get a lot wrong, One particular area of focus is badly fitting or incorrect armour – and in particular the Bevor.

In this article, we’re going to take a look at this ticklish subject. 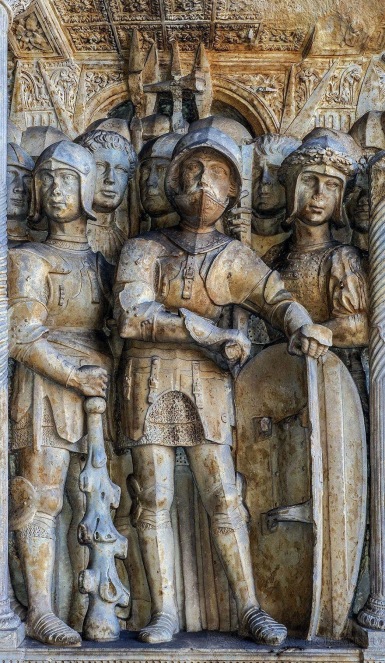 The Bevor is a throat and lower face protector, covering the area between the breastplate and the helmet.

There are two areas where we believe many re-enactors arguably get it incorrect. These are

Let’s take a look at the first point – aka the great “over or under” debate.

Many re-enactors wear their bevor underneath their breastplate, fixed in place.

The weight of evidence is that these were primarily worn on top of the breastplate, rather than underneath and was attached either via strap like the one shown on the relief sculpture above, or often on German harnesses via a clip onto the breastplate like the example shown below. This appears to be known as stapled.

The evidence is that some were padded on the inner layer, and occasionally had integral maille protection for the back of the neck as in the Higgins Museum example, and in artwork from the period. 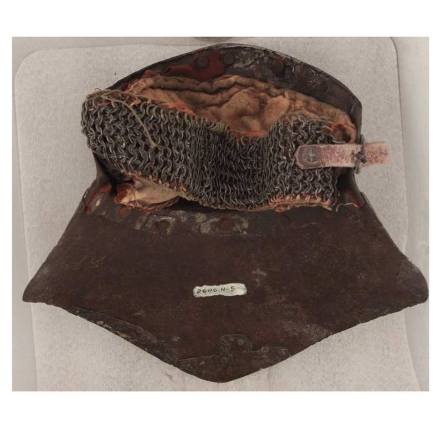 Rear of an extant bevor from the Higgins Museum showing padding, and rear mail protection. Thanks to Paul Spence of the Making 15th C Glorious Group for posting the picture.

The Pastrana Tapestries can also be consulted for contemporary usage in the later 15th C which shows a number of bevors worn by the combatants. (In the late 15th century, a set of four large tapestries was commissioned to commemorate the battle of Asilah. They were woven by Flemish weavers in Tournai, Belgium. The tapestries are notable highly for their portrayal of a contemporary event. The works are regarded as among the finest Gothic tapestries in existence.) 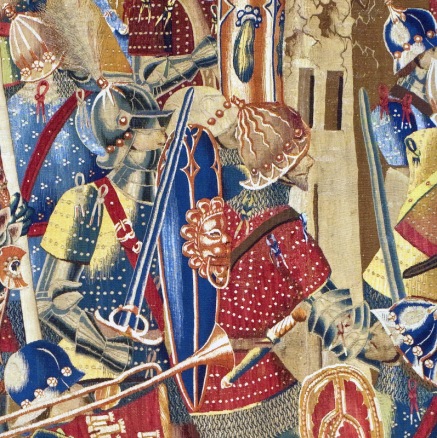 Detail from the Pastrana Tapestry. Note the Bevor worn high protecting the neck and lower face. 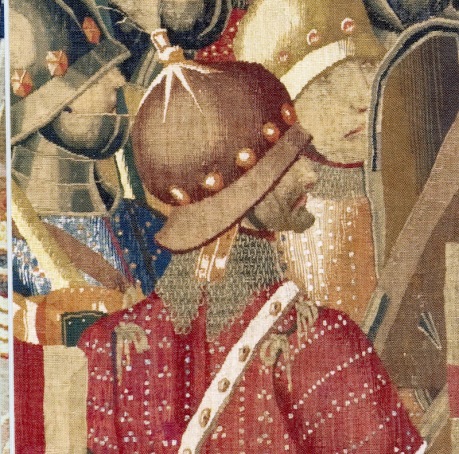 Another Bevor. We also love this image for the hinge closure on the maille standard, though that subject is for another day!

One argument used by many is that we cannot apply usage in Italian or Mediterranean harnesses to what was occurring in England but again if we consult effigies and artwork from England this also holds true, see for example the wonderful frescoes at Pickering Church.

Bevors within an English context. Wall Fresco at Pickering Parish Church c1460. Thanks to Ian Brandt of the Making 15th C Glorious Group for posting the picture

In the interest of openness, there are admittedly are a few museum examples where the bevor is fixed underneath the breastplate, but the consensus from curators is that these seem to be for using in jousting, i.e. within a tournament rather than battlefield context – and is required to deflect or contain the full force of a lance.

Wallace Collection breastplate. However the lance rest would indicate a tournament usage, and the history of the piece is not known – it is unclear when the upper was riveted to the lower, and may be a Victorian era composite.

There is also some evidence that the gorget (a different style of throat protection without the lower face cup) was worn underneatha breastplate, as per this statue from Ulm dated to 1482. 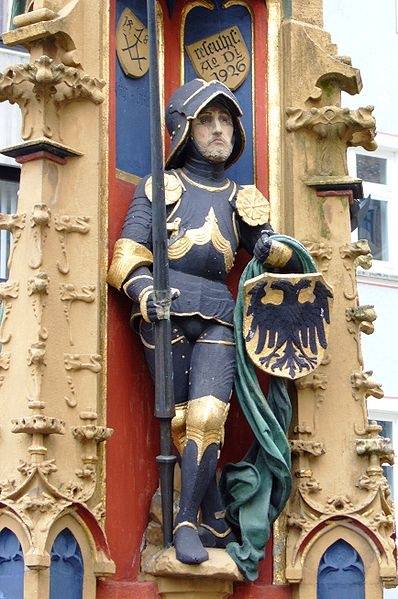 Statue at Ulm from 1482 showing gorget under breastplate.

From a purely practical view, mounting the bevor on top of rather than beneath the breastplate does have merit. It is one piece of armour the wearer is most likely to want to remove when not in need of it. Given that people are illustrated dining with their armour on, we can only imagine how annoying it would be to strip down beyond the breastplate in order to eat your dinner when on campaign..

So, to conclude point one – the weight of evidence is that it was over the breastplate.

From what we have seen above, the bevor is worn high, protecting the neck, throat and lower face. However many re-enactors wear this piece of armour as a chest adornment protecting their pectorals.  There are we think a couple of reasons why this is.

Firstly, they may not have purchased a breastplate and are using the lower lame of the Bevor for this purpose.

Secondly, they are using the cup of the bevor as a ‘stop rib’ lower down the torso, in order to deflect bill weapons away from the face that drift up from the central chest target common in most mock combat systems in the UK.

Thirdly, and most probably,  because the recent flood of cheap imported Bevors usually means they are wearing a “one size fits all and dwarf’s many” piece and it does not work in conjunction with their chosen helmet.

In artwork, the *only* example we have been able to find for a slightly lower placing is below.  We believe context is key here however, and that the bevor has been loosened (the lower point ties are not tied) and the individual is leaning over which causes the Bevor to hang away. The more probably explanation is that the artist is showing us a scene where he wants us to be able to see the expression on the individuals face. 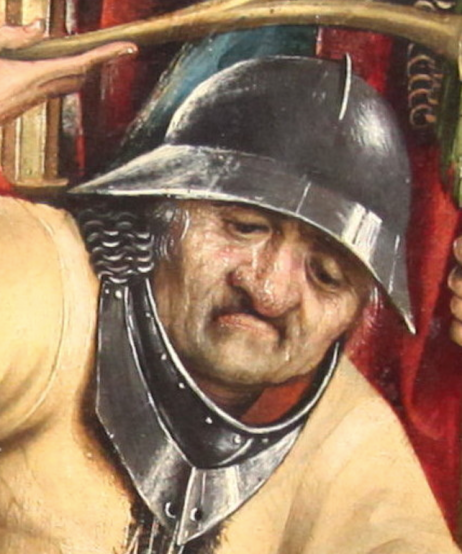 At this point, it would probably be pertinent to show images of examples of where re-enactors have got it wrong. But this would on balance be unfair – many “re-enactors” are in the hobby for the sport of mock combat as opposed to serious historical interpretation. Secondly, some individuals are resistant to improvement and will not like being singled out.

Therefore let’s use a generic image as to what “wrong” looks like, and “He-Man and the Masters of the Universe” helpfully provides us an illustration!

As you can see, the bevor is far lower than the images we have seen in artwork. Yet, you will see this “Masters of the Universe” look at battle re-enactments across the land this summer.

So, to conclude – let’s take a good look at what in our opinion a good historical interpretation should look like. The image below looks like those in contemporary artwork, and clearly protects the face and not the upper chest. It works *with* and not *against* the Sallet helmet in order to protect the wearer.

Wearing a Bevor – the CORRECT way. Note also that the brow of the Sallet protects the forehead.  Thanks to Alex Kay of the Pastons for the use of this excellent picture, taken by Andreas Petitjean.

Obviously, this level of interpretation may be beyond the reach of some, but it does show what is possible and what living historians should be aiming towards, rather than remaining just re-enactors. It shows that it is worth getting something made to measure where possible, rather than just accepting a large voluminous bevor because it’s cheap.

After all, no one wants to end up with egg on their face…

Disclaimer: Neither the author or the Harrington Company accept any liability for any injury arising from interpretations and research contained within this article. This is provided for historical research, and should not be taken as providing any indemnity for Personal Protective Equipment.

You are responsible for your own safety equipment and it’s efficiency when participating in any mock combat – not us.

This entry was posted on May 28, 2016, 8:35 am and is filed under Uncategorized. You can follow any responses to this entry through RSS 2.0. You can leave a response, or trackback from your own site.