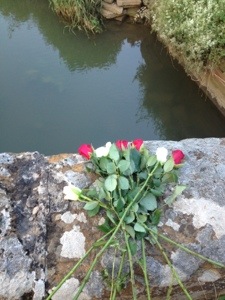 It is widely known the Companye has a special connection with Edgecote, one of two Wars of the Roses battlefields in Northants (the other being 1460 Northampton). The Companye has been involved in actively campaigning for the preservation and recognition of this pivotal 15thC battle – sadly not widely known and not even upon the English Heritage Battlefields Register. The battlefield is currently at threat from the proposed HS/2 rail link, which is planned to drive right through the site (and directly through some areas recently identified as possibly containing mass graves from the battle).

Each year, the Companye walks the battlefield on the anniversary of the battle, and lays a commemorative wreath at the Trafford Bridge site. (Note: for details of the 2013 walk see Events).

In 2009 & 2010, the Medieval Siege Society staged a re-enactment of the battle, upon the actual battlefield. It was truly an emotional moment, and drew upon the evidence in contemporary accounts to create a story of the events of the battle.

The Battle of Edgecote was fought on the Northamptonshire/Oxfordshire border six miles from the town of Banbury on 26 July 1469. On one side were forces loyal to King Edward IV, and on the other, a rebel army led by a shadowy figure known as ‘Robin of Redesdale’. However, the real power behind the rebellion was Richard Neville, Earl of Warwick, and it was here that he would earn his title as the ‘Kingmaker’. The battle and the events surrounding it are briefly featured in episode two of the new BBC T.V series ‘The White Queen’ but as always, the real history is far more complex, and far more interesting.

In the summer of 1468, Jasper Tudor, Earl of Pembroke and a staunch Lancastrian returned from France where he had been staying for the previous six years. His castle at Harlech which was being besieged by Lord William Herbert and Tudor had come with a small force to relieve it. However, Herbert forced his little army into the hills where it was beaten in battle, although Tudor himself, managed to escape. The castle fell soon after and as a reward, Herbert was given Tudor’s title of the Earl of Pembroke. The new Earl was also made the ward of Jasper’s nephew, a ten year old boy called Henry Tudor.

Warwick’s power was on the wane. The Woodville’s, of Grafton Regis in Northamptonshire, the family of Edward’s Queen, Elizabeth, was on the ascendance. Warwick had already been snubbed when Edward chose Elizabeth over his own choice of a French princess as Queen. Then to rub salt into the wound, the Lord Rivers, Richard Woodville was made an Earl and his son Anthony made Lord Scales. They were given key government posts and all twelve surviving children were married into the gentry whilst Warwick’s own daughters had been banned from marrying. So, Warwick began to plot.

He began by recruiting Edward’s brother George, for in him, he had another viable King.
In April, a rebellion started in Yorkshire led by a Robin of Redesdale, but quickly dissipated. No sooner as that rebellion ended another started, again in Yorkshire. This time the leader was Robin Hildyard or Robin of Holderness and seems to have been protesting about the ‘Corn Tax’. They quickly marched on York only to be met by the Earl of Northumberland. After a battle outside Walmgate Bar at York, Hildyard was captured and executed. The rest of the rebels fled. Both leaders had connections to Warwick, so its without doubt he was behind both rebellions.

Unperturbed by his earlier failures Warwick tried again. Around 21 June, he sent out orders to stir up the commonfolk ‘for the time to be busy was now at hand’. On 29 June, Warwick wrote to his supporters announcing the marriage of his daughter to Clarence. On 4 July, Warwick, Clarence, George Neville and his brother-in-law, John de Vere, Earl of Oxford set sail for Calais. About the same time Robin of Redesdale emerged from the shadows once more. A third rebellion had begun.

Edward, in the meantime was on tour, initially to the north but then to East Anglia. On 1 July he was at Fotheringhay where he met the Dukes of Norfolk and Suffolk and at which time he appears to be oblivious to the growing threat in the north.

King Edward IV is at Grantham intending to continue his progress north with his Woodville family.

King Edward IV is at Nottingham. He finally realises the seriousness of the situation and urgently requests 100 archers from Coventry.

Edward IV vastly outnumbered by the rebels leaves Nottingham and turns back south. He sends the Woodvilles into Norfolk for safety whilst Earl Rivers and his son John return to their manor at Grafton. Edward also sends an urgent summons to William Herbert, the new earl of Pembroke and Humphrey Stafford, Earl of Devon to march north as quick as possible collecting all the men they can on the way. Unusually Pembroke has very few archers, most of which are provided by Devon.

Warwick lands at Sandwich and marches towards London via Canterbury. Edward is still at Nottingham.

Warwick is at Canterbury where he meets those who wish to assist him ‘arrayed for war’. More supporters gather in the Midlands including Thomas Wake sheriff of Northampton, Thomas Stafford of Middleton and Sir Edward Grey of Astley. The northern rebels continue to march south.

Warwick has reached London and now heading north along Watling St. One chronicler says he has 20,000 men with him. The rebels bypass Edward still in Nottingham and continue south. Herbert, earl of Pembroke and Stafford, earl of Devon have met at Cirencester and are marching north too.

The rebels leave the Great North Road at Stamford, travel through Northampton and on towards Daventry. King Edward and his small army follow at a safe distance. Pembroke and Devon continue north towards Chipping Norton.

The rebels have passed Northampton and reach the area around Daventry possibly heading to Coventry. Pembroke and Devon are approaching Banbury and send an advance guard of around 2,000 cavalry towards Daventry. The cavalry see the rearguard of the rebels possibly on the Banbury Lane or near Daventry and attack. The Royalists are beaten off however, and they return to the main army Buoyed by their success the rebels turn towards Pembroke and Devon.

Pembroke reaches Banbury and a row takes place with Devon. One source claims this was over a Banbury barmaid, both wanting to spend the night with her, and Pembroke pulls rank. More likely is that Pembroke got to the town first and took all the available lodgings etc. for his men. What ever the truth, Devon with his 6,000 archers leave Banbury and encamp around 12 miles away.

Rebel light horsemen under Lord Latimer clash with Pembroke’s men again near Edgecote. This time it is the rebels who come off worse. Either Latimer or his son Sir Henry Neville goes to far forward and is captured and executed by Pembroke.

At some point in the morning, Pembroke with around 7,000 – 10,000 men form up on Wardon Hill, on the northern side of Danesmoor (on the northern side of Trafford Bridge). Around 10-15,000 rebels are on Edgecote Hill on the southern side of Danesmoor (it is also possible that the two sides are arrayed the other way round). The rebels then cross the river and attack Wardon Hill, shooting arrows into Pembroke’s men. But, because Devon’s archers are missing, Pembroke is unable to fire back. Suffering considerable losses, Pembroke is forced to come off the hill and attack the rebels.

For a while, Pembroke’s forces have the upper hand and Sir Richard Herbert, Pembroke’s brother is recorded as twice cutting his way through the rebel lines and back with his poll axe. It is likely that the rebels retreat back over Trafford bridge followed by Pembroke’s men. Robin of Redesdale – Sir William Conyers is probably killed at this point and his younger brother Sir John takes over command.

Then a new force is seen arriving to the east on the top of Culworth Hill. They are shouting “A Warwick, a Warwick” and carrying Warwick’s bear and ragged staff banner. Pembroke’s men think its the whole of Warwick’s army arriving, their lines start to collapse, and then the fresh troops assault their flank. A rout follows. However, Warwick’s army is in fact only 500 men, described as the ” The rascal of the towne of Northampton and other villages about”, led by John Clapham. Warwick’s main army, in reality had only just reached Northampton.

The Yorkist army is slaughtered, and among the dead are at least 168 of the flower of Welsh nobility. It is recorded that around 1,500 rebels are killed at the same time. Both Pembroke and his brother are captured. Whilst one account says they were taken to Banbury, others say they were taken to Warwick and Clarence at Northampton, where they were executed at Queen Eleanor’s Cross – the site of Warwick’s greatest victory nine years earlier.

Also at the battle was the 10 year old ward of Pembroke, Henry Tudor, more famous as King Henry VII. After watching the carnage he was led to safety by Sir Richard Corbet who took him to Pembroke’s brother in law, Lord Ferrers.

King Edward heads back to London with a small bodyguard. However, he is captured by George Neville whilst asleep his bed at Olney. He is taken to Middleham. As Warwick also has King Henry prisoner in London he earns his title of Kingmaker.

Warwick marches from Northampton to Grafton where he finds Lord Rivers and his son John in hiding. He and Clarence takes them both back to Northampton and executes them at Queen Eleanor’s Cross.