Posted by harringtoncompanye in Uncategorized on May 31, 2013 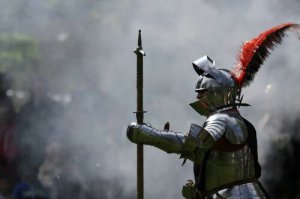 June men at arms training will be on Wednesday 12th June at the Buckingham Scout Hut, Adams Close, Buckingham. We will start at 8pm sharp and finish at 10pm.

Posted by harringtoncompanye in Uncategorized on May 22, 2013

The Companye marched forth from Wolfage Manor on campaign once more. This time, we were paying a visit to the splendid Dunstable Priory – which was celebrating the 800th anniversary of its founding. One has to really admire Dunstable for its determination to celebrate it’s history and the fantastic enthusiasm and passion for heritage shown by the council and their Mayoress – it is a shame other councils and local authorities do not do as much.

The event was themed around the Priory, and the MSS tied it into the Second Battle of St Albans from a historical standpoint. A living history encampment was setup by the MSS around the Priory, which we contributed to. Many Companye members were impressed with the adjacent LH layout from the Company of the Silver Arrow (our battlefield allies for this event), which looked fabulous.

The background was that Yorkists fleeing from the battle at St Albans, tired and wounded, were seeking shelter and aid within the Priory. Sir William had been dispatched with a small force to secure the Priory and deny it to them.

The Companye in fierce hand to hand fighting.

During the battle, Sir William deployed his Companye with a mixed force of billmen, handgunners, archers and coustilliers. The fighting was fierce, and the new billmen in the Companye (Howard, Alan and Marcus) acquitted themselves with distinction, using the feared Langue de Bouef polearm to deadly effect!

Fire support was provided as ever by the handgun team of Steve and Nuala, whose shots rang out and delighted the enthusiatic local crowd.

During the ensuing chaos, the Yorkists managed to get a messenger (Ben of the Bayards, we love the Bayards) through to the Priory. With the Yorkists at the point of defeat, and the their leaders about to be separated from their mortal coils the Prior strode forward and demanded no further blood be spilled on the penalty of excommunication.

An agreement was reached whereupon the captured nobles would be allowed to fight, and put the matter in God’s hand. Single combat ensued, and when the Yorkists had the better of things they were cut down by the Companye handgunners – much to the Prior’s disgust.

The threat of excommunication was lifted following the intervention of the pious Henry VI, and the Medieval Siege Society took their bows to well deserved applause. It was a hard fight, possibly one of the best so far this season!

Away from the battlefield, we had a great time. There were some magic moments – including the best MOP question so far this year, namely ‘Is that a real head..?’. However, nothing will trump young Alec the archer sewing his livery tabard to his trousers by accident…!

We were delighted to see the return of the Companye Chaplain, so that our souls may receive salvation once more. It was great to the newer members of the Companye earning their livery badges.

Shona has a new nickname of ‘Irontoes’. The story behind this is sadly classified, but we look forward to the shiny new crossbow that Rob is going to buy her.

Posted by harringtoncompanye in Events, Uncategorized on May 10, 2013

The Companye has returned on campaign from Old Sarum castle in Wiltshire.

Harrington Companye assaulting the walls of Old Sarum. Pavaises are being used to defend against incoming missiles.

It was a bank holiday weekend event for English Heritage, at one of their premium locations in the South of England. We were pleased to welcome Alan, Howard and Warren for their first event with the Companye – plus Alex the archer has now been fully accepted into the throng.

As usual, the Companye had a fantastic time. Given the last castle we laid siege to featured -5 degrees temperature and flurries of snow, the sunburn was (almost) welcome!

It was an action packed event, and feedback from the public, English Heritage, and the MSS membership has been fantastic. All aspects of the event were interlinked into one overarching story for the public to immerse themselves in and step back in time.

The event was set during a period of the Wars of the Roses known as the Readaption of Henry VI. The day opened with Lancastrians besieging Old Sarum Castle, was which home to some Yorkist loyalists who were holed up there. Given the strength of the castle defences, the Lancastrians were content to starve the Yorkist forces into submission.

Following a display of English archers practising at the butts, to relieve the boredom of the siege a tournament of foot was proposed between the attackers and besiegers. Whilst this sounds far fetched, there were actual recorded instances of this type of thing where a siege was prolonged.

Sir William Harrington entered into the Tournament of Foot, which took place in a wooden arena inside the Castle Keep. The Tournament was progressing apace, when a messenger arrived and brought news that Edward IV had returned to England! Henry VI was marshalling his forces and the attackers were ordered to bring and end to the siege as quick as possible.

Following this, the children from the audience were issued with the famous medieval Bill weapon, and taught how to be soldiers in readiness for the upcomng battle.

The battle opened with the mighty Medieval Siege Society Trebuchet – crewed by Harringtons Corin & Dale -hurling projectiles against the castle. The Lancastrians assualt on the castle was met by fierce handgun fire from Yorkist handgunners.

Companye Handgunners pour down fire from the battlements of Old Sarum

The Yorkists sallied forth from the castle in an attempt to stop the fearful trebuchet and battle was joined. Lancastrians separately sent assault parties up the ramparts to silence the handgunners and archers, but to no avail.

Eventually, after fierce fighting the Yorkists won the day – to thunderous applause from a record audience for the site.

After hours, the usual Harrington apres-punchup commenced! We were all grateful to KOF and Phil for bringing doughnuts – and featuring a rather stylish one…

We also put on a great living history encampment in the sunshine. As it was a blue riband English Heritage event, high standards of authenticity were in evidence, and we were more than happy to play our part. No nylon knights, Lycra leggings and trippy fantasy ‘Wang’ in our camp thank you! Though mysterious forces appeared to have been playing with Sir William’s harness…. 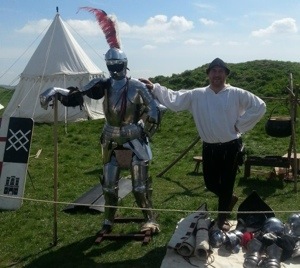 All in all a fantastic event, probably one of the best ones for some years, woe to those that missed it. It was great to be sieging a real castle, and actually making it the star by involving it fully. English Heritage are already talking about a return, and if so the Companye will march to assault the walls of Old Sarum once more!!!

Next up, Dunstable Priory.

Ps. Special mention to those that stayed on Sunday to do the pack down, and especially Loki, who was mad enough to drive from Essex on the Saturday just to help set up! Now that’s dedication for you…