The Companye has recently returned from the start of our 2014 Campaign, a fantastic event at the ever splendid Hedingham Castle. Hedingham owns a special place in the Companye, it was here that we appeared in livery as a new household for the first time. Each year we have a birthday party (more on that later) and take a photo to show our evolution as a Companye.

The event itself was a frantic fun packed two days of fighting, feasting and fornication. The dateline was 1471, post the Battle of Barnet. Twice daily the mighty Harrington Companye assaulted the great stone keep, being defended by the Cobhams and the Hartleys. The fighting was really great on both sides and most MSS combatants agreed that was the best start to season in well over a decade. The Harrington winter training regime had obviously yielded great rewards, it was noticeable some folks – mostly in the Cobhams – were still going an interesting shade of beetroot red and blowing out of their nether regions. Train hard, fight easy folks!

Hats off to the four knights of the Hartley Companie, who at one point felt the full force of the entire ‘Big Black Attack’ and made a good showing of it. They were deservedly cheered off the battlefield by the Companye on the Monday afternoon.

Sunday evening saw the infamous “Harrington Birthday Party”. Having recently acquired a large new Burgundian style tent for evening merriment then a cocktail party was in order. In a shock move, the prize for best dressed did not go to Loki, rather Nick stole the show with a hot little red dress number which was set off nicely by the beard and navy tattoos. “MY EYES – THEY BLEED!!” – Lord Harrington.

Counselling is available for all those who saw it, though all agreed it was still an improvement on some of the women gracing The Jeremy Kyle Show…

Highlight of the night was the introduction of a new song, complete with actions, courtesy of Bulldozer and Daisy. ‘Father Harrington’ can be seen in the video below… Seven sons apparently – well, we did mention fornication!!

The living history encampment was packed with the public, and we were also delighted to welcome Lady Jen of the Ap Harry’s into the encampment for the weekend – always a pleasure to have her with us and teaches us so much.

Annoyingly, the weekend ended with some rain but thankfully we are all off to Kenilworth Castle this coming weekend to dry the tents out and do it all again!

You can see some press coverage here:

And a rather good photo set on Flickr here: 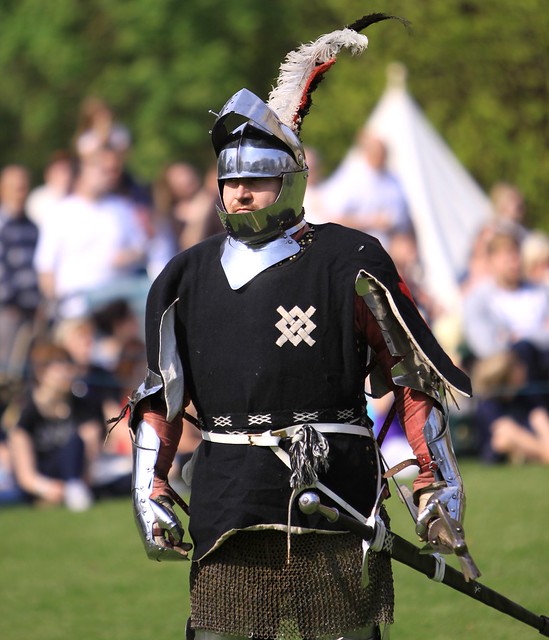 This entry was posted on April 25, 2014, 7:05 am and is filed under Events. You can follow any responses to this entry through RSS 2.0. You can leave a response, or trackback from your own site.